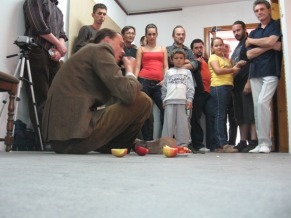 The 11th IMAF Festival was opened with Following the Whispers in-between, a durational performance trilogy by UK based artists couple Alexandra Zierle originally from Germany and Paul Carter from the UK. The work cross-references many traditions and philosophies based around the symbology of the apple on one hand presenting the fruit of love and on the other the fruit of knowledge. One such reading is that Zierle and Carter reached for eternal subjects found in the Bible, speaking of the apple, sin and of love. Paul, during their durational work, energetically cuts out the "heart" of the apple, eats it, offering the remains to the present audience, seemingly the sinners. During that time, Alexandra chops the red apples in half while hiding her torso and face behind a large book and gracefully at times, abrupt at others, leaves the halves amounting as an offering for Paul and the audience. Later on, "wired" to mics, they tell a silent tale on a 1000 white papers. The whiteness of the paper is covered only with imprints of their ink-blackened occasional bloodstained lips, uttering sighs, whispered declarations, and sometimes a cry, for love. At the end all of us received two halves of the "sinful object" with the messages "the end of knowledge is love" and "the end of love is knowledge".

An hour-long compilation of videos was also presented during IMAF 11, containing short extracts of works made by all IMAF participants during the first ten years of the Festival. The audience could see precious footage of works performed in Odzaci, Novi Sad and Belgrade made by the 64 artists during this time period.

On the first day of the festival, Peter Kuestermann, another artist from Germany, presented his work Magic in my hands, a performance in which Peter does magic tricks for the enjoyment of the audience, both children and adults. Despite his conviction, Peter is not an actual magician and his tricks are mostly directed at enhancing positive energy and atmosphere, whether they are successful or not. His magic is in revealing the artistic side in us/the audience. By presenting certain professions and situations in more or less naive but determined fashion he provokes compassion and understanding thus receiving the full support of the audience.

Stanisa Krstic, a young artist from Odzaci performed at IMAF for the first time with his performance Levitation. His work is dedicated to the exploration of esoteric meanings, presenting the people of Odzaci with possibilities of feeling levitation and universal cosmic freedom. He achieves this by moving things like carpet, table, chairs, desk lamp, book and a lit candle from the floor to the wall of the gallery. He suggests and invites on movement within space dedicated only for illuminated ones.

Great interest and confusion was provoked by Colm Clarke from Northern Ireland with his durational performance titled Strain, which he performed on the second day of the festival, both in the yard in front of MAS gallery and on the street. From 6 in the morning till 6 in the evening, Colm dressed in a white delicate suit with a ‘band aid plaster mask’ on his face, made interventions around and up a tree. His white attire and bare red painted feet caused different reactions from passersby. With the use of salt to map particular space and boundaries - a tree on the street, and later in the yard of MAS Gallery, Colm’s intense concentration on the act of doing and subtle physical strains left all mesmerised. This work spoke of ritual cleansing. Sweeping dry twigs, leaves, dust and different garbage from the pavement cracks, Colm meditatively invoked the cleansing of these ‘special spaces’, gathering junk, to later on identify himself with certain natural energy components.

Entitled Voyage, Aleksandar Jovanovic’s performance profoundly speaks about mans voyage from birth to death. A marble plate, an hourglass rested on a black cube, and a glass of water with a pocket size human skeleton dominated the gallery space. With a black baby doll suspended from the ceiling, Aleksandar consistently pastes photos on each side of the cube starting with the one of a very small child in large hands with the inscription: “They were once like me ... I’ll someday be like them“. Periodically turning the cube, drinking water from the skeleton glass, the sand and time run out suggesting that life is also. He pastes the last photo with inscription: “we were once like him ... he’ll someday be like us“, finally takes the baby doll and removes its head, pouring from it white dust on his head, allowing us towitness his transformation old age.

Radoslav B. Chugaly’s performance holds it’s meaning entirely in its title Polyglot washes hair. In his latest works, as the author, he simplifies the idea, and it’s realization. In his performances, Radoslav does not make work on ‘great issues’ nor on important and great subjects such as politics, history, love...etc. Instead Radoslav took an electric hair clipper, stood in front of mirror suspended to an outside wall and trimmed his hair, shaved his beard, and afterwards simply washed his hair from a bucket of water. He knows that one does not need to complicate a performance and that clarity and simplicity of the idea can create valuable and memorable works. The audience was provided with the thought space needed to think about an artwork as a title or about the concept of an artwork in a sentence.

IMAF 2009 guests were Hip-hop duo from Odzaci KALTEK, comprised of young and visionary Nikola Sumic and David Jovanovic. Their texts are often highly engaged with musical production and clearly embed social themes within them. Their works usually speak of youth problems and present a critic about an expanse of a transitional society. At the closing of the festival they presented half an hour from their new album that is soon due to be published.

Despite the weak financial situation presented to us, this year’s festival, through it’s diversity and strength of work was still able to confidently fulfil the expectations of contemporary art critics as well as local audiences. IMAF 2009 was kindly supported by the Ministry of Culture of Republic of Serbia, Department of culture of the Province of Vojvodina and a certain number of business organizations from Odzaci. We would like to thank them for all their support and help in making this event a success.

This diverse and charged festival of performance art drew to an end with Nenad Bogdanovic’s mesmerising durational performance Process. Set to a meditative backing track, dressed in black Nenad lay in the middle of the performance space beneath a suspended cheese cloth filled with fermenting cheese in it’s process of maturing and solidifying. Excess water from the straining process dripped through the cloth down onto Nenad’s naval, emphasing his subtle breathing movements, relaxed, but fragile, illustrating the nature of the human experience. Periodically he would stand and go to the corner to write a single letter on a piece of card and tape fasten it to the string holding the cloth. Starting from the top and one by one working his way down, each letter gradually unveiled the message. Keeping the audience in anticipation, the message eventually spelt out ‘Nature’. After the continued process of laying beneath the progressively slower drip for periods of time, Nenad began to fasten images of himself from different periods of his life. Starting chronologically from top as a young child he worked his way down the string to the last image, a photographic negative of himself standing in front of a church. Both sides of the string now presented a clear, simple yet powerful message, one that when united tells us of the process of life. It mirrors the process of nature, consisting of maturing and change, nurtured by the steady rhythm of the breath and perpetual drip, that ran it’s course. The performance ended with an act of painting in white the words ‘Perf’, short for performance, and ‘life’ vertically next to each other on to his shirt suggesting their equality. 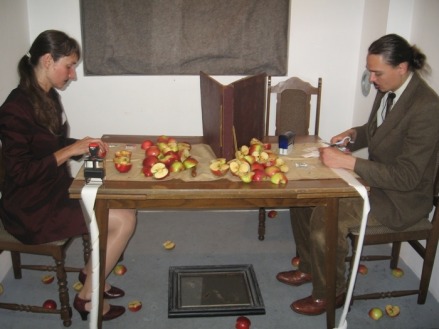 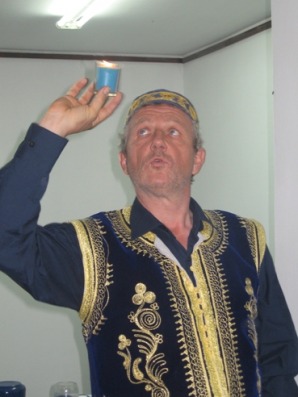 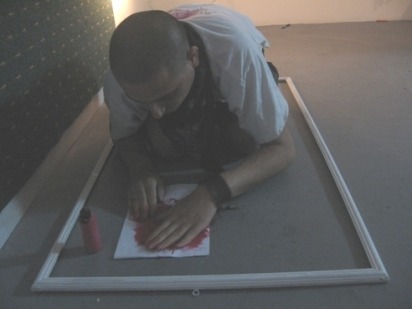 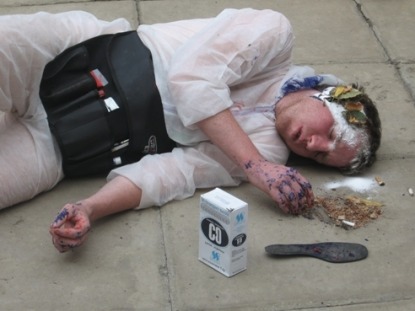 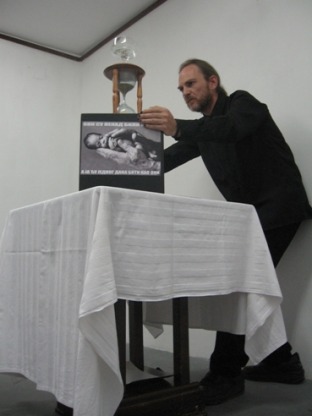 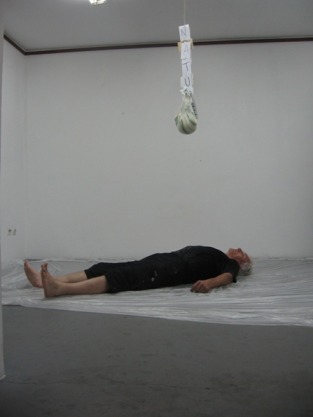 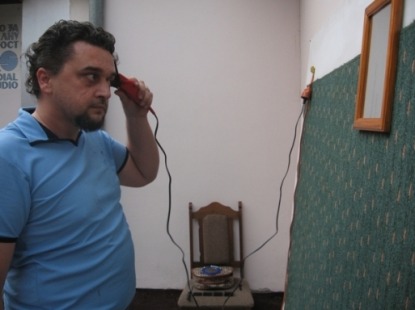 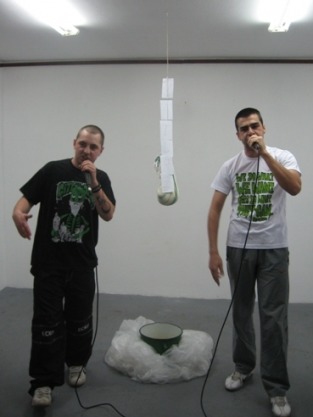 
Alexandra Zierle (Germany) and Paul Carter (United Kingdom)
Alexandra Zierle and Paul Carter's collaborative work is interdisciplinary, multi-sensory and site and context responsive spanning from performance, sound, video to installation. Through their practice, Zierle & Carter critically examine different modes of communication and what it means to be human both as individuals and as a ‘collective entity'. Their work addresses notions of belonging, cultural identity, harmony through conflict and the transformation of limitations.


Colm Clarke (Northern Ireland)
Clarke is a perfromance artist based in Belfast, born in New York 1983. Clarke's most recent performances include Anymous Festival (Pilsen, Czech Rep.), Arsenal Gallery (Bialystock, Poland), Perfomance:Irelanda (Santiago, Chile) and I AM (Stranmillis, Belfast). Clarke views performance as a tactile strategy to develop understanding and explore relationships between ourselves and our environment. Clarke was co-director of Catalyst Arts (2006-8). He currently sits on the board of Bbeyond (NI) and is founding director of ADHOC (NI).


Guests : KALTEK (Serbia)
Hip hop group Kaltek consisting of two members: David Jovanovic and Nikola Sumic, was created in the desire for free and positive expressions. Group was formed in 2006 and is well known in a regional music scene. Their newest compilation ‘College of Street Science' has 15 songs.