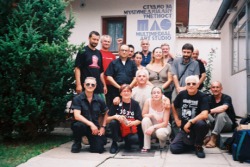 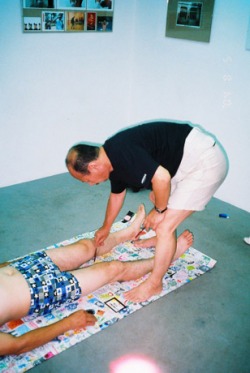 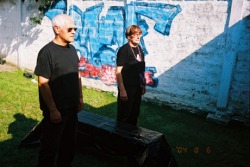 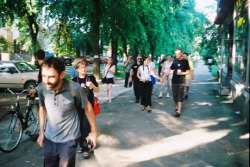 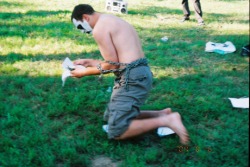 Nenad Bogdanovic, Serbia
Performance: “Flight or marking of the territory” (Territory of Odzaci) 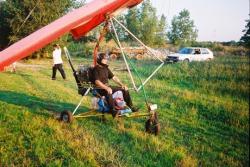 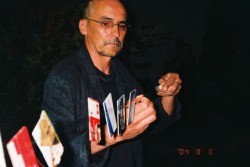 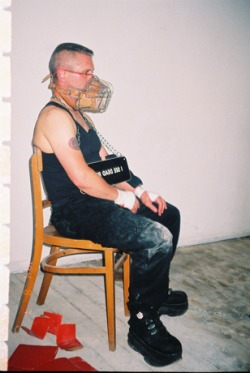 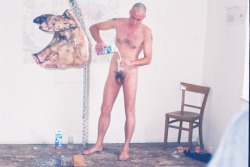 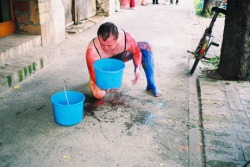 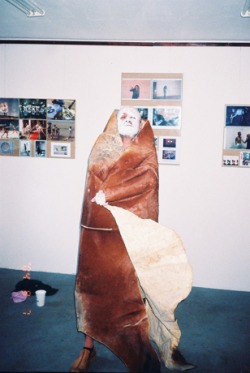 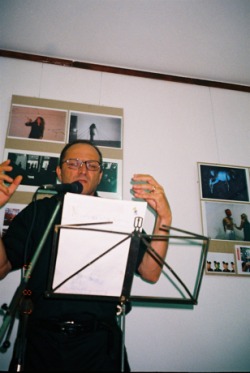 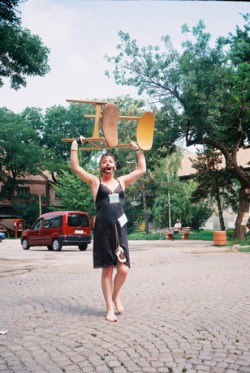 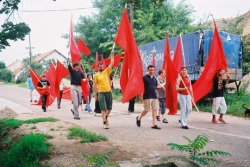 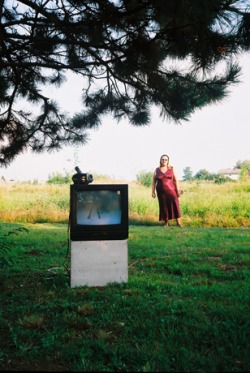 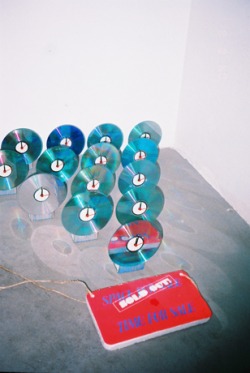 
RYOSUKE COHEN
Ryosuke Cohen, born 1948, Osaka, Japan is a mail artist. He was responsible for the Brain Cell mail art project, which he began in June of 1985 and retains thousands of members in more than 80 countries, e.g. Hans Braumuller, Theo Breuer, Michael Leigh or Litsa Spathi.  In August 2001 he began the Fractal Portrait Project. He has taught art to school children for more than 25 years.
Cohen discovered mail art through the Canadian artist Byron Black. Early work by Cohen is a mixture of traditional Japanese imagery, contemporary icons, and numbers, as well as his signature, the letter "C".
Cohen's family name is conventionally romanized as Kōen, but on the advice of a friend, he adopted the English spelling 'Cohen'. He is not a Kohen.

FRANCA & EMILIO MORANDI
Painter, operator of installations and performer.
Emilio Morandi in the last years is present at many international art manifestations, festivals and meetings.
The his investigation expressive is above all concentrate in the poetic behaviour and installation, where he use the his own language, after many years of engagement and artistic relationship with others operators in the experimental art area.
The performance of Morandi is art work mixture of gesture, writing and sound.
Franca Monzani – Fotografa performer collabora con l'Artestudio dal 1980 dove e'curatrice dell'archivio fotografico e video di Art Action Internazionale.
Presente come performer in festival e meeting in Italia e nel mondo.

ANGEL PASTOR
Born 1957 in Barcelona.
Theatre studies, Degree in Art History.
Involved in Performance Art since 1995. I’ve performed in different meetings in Spain, Argentina, Chile, Uruguay, France, Poland and Belarus. My work has diferent lines, essentially one autobiographical with a work with illness and another contextual. Performances are allways a place for experimentation and Freedom, interested in psychological subjects.
Organizer of several Performance meetings.
1999 to 2002 member of Club8 International Festival of Barcelona eBent.
2003 member of Accio Itinerant.

ANDRE STITT
Born in Belfast, N. Ireland, Stitt is considered one of Europe's foremost performance artists. He has worked as a live artist since 1976 creating hundreds of unique performances at major galleries, festivals, alternative venues and sites specific throughout the world.
His artistic output includes performance art, live work, relational activity, installations, digital print, videography, photograhy, painting and drawing.
After living in London for nearly 20 years he relocated to Cardiff in 1999 to become head of the Time Based Art course at Cardiff School of Art. The course focuses on contemporary interdisciplinary practices - performance art, video, installation, sonic, interactive arts and web casting.
In 2000 he opened trace: Installaction Artspace in Cardiff initiating a robust programme of international time based work. It is estimated that by 2005 Trace will have produced around 40 installation/performance exhibitions at the gallery in Cardiff and presented the work of 36 artists in external projects. In total the work of 80 artists.
In 2001 he curated the biggest performance art event in London for over a decade :
Span2 featured a 4 week programme of 21 international artists from all over the world.
Stitt is identified with a strain of performance relating more to visual art and art action
[identified in Stitt's work as "akshun"]. His work focuses on difficult and traumatic themes; issues of oppression, freedom, coercion, subversion, experiences of alienation, appropriation of cultures, globalisation, and communal conflict. His work physically and emotionally embodies the divisive forces of capitalism and materialist addiction; processes of building and disintegration and the resulting journey toward redemption.
Stitt's uncompromising style has been variously described as "..enigmatic and
corruptive..unmissible" [Time Out, London] "..fierce integrity, immediate, spontaneous,
releasing" [High Performance, USA] and Performance Magazine [UK] has described him as "..perhaps our shaman who is prepared to explore what most of us would not care to be let alone try to express" "..the nearest thing Britain has to a genuine indigenous cult performer."

MILAN GRAHOVAC
Born in Zrenjanin in 1958. Graduated classical painting on Art Academy in Novi Sad in 1991. Specialized in graphics - litography on grafical section of Academy of fine arts “Minerva” in Groningen, Holland, 1991. - 1992. in class of prof. Vim Jonkmana. Mastered in 1997. on section for drawing on Art Academy in Novi Sad in class of prof. Milan Blanusha.
Member of Serbian art society since 2003.
Since 1989. has been recognized as free-lance artist.
Since 1985. exhibited on more than 60 various exhibitions.

NICOLA FRANGIONE
Nicola Frangione was born in Forenza (PZ), Italy, in 1953. He has been living and working in Monza since 1972, as an interdisciplinary artist experimenting with several techniques: visual arts, publishing graphic arts, music and sound poetry, video and theatre production, visual poetry and mail art.
As well as being concerned with visual poetry, he is among the main mail artists in Italy. For about 20 years he has been playing a role in developing and spreading this art in Italy, carrying out projects and organizing itinerant exhibitions and workshops.
He has published and produced several art books.
From 1987 to 1995 he directed the publication of the cultural dynamics magazine “Harta” and managed the multimedia art centre, “Osaon”, Milan, in tandem with Luigi Bianco. Since 1996 he has  been co-ordinating “edizioni Harta Performing”, concerning Italian performing arts. Research on music and sound poetry has resulted in several records and CDs. Art Director of “ART ACTION” International Festival Performance Art in Monza, Italy.

SINEAD O'DONNELL
Born in Dublin, Ireland. Sinead is currently a member of Queens Street Studios, Belfast, Northern Irelands largest artist collective. Works to date have involved sculptural props theater used in performances, thought of as tempory extentions or armatures for the duration of the process. Viewing the artist as a functional public sculpture.

MARTIN ZET
When he was 42 his birth date became very famous.
He has 1 mother, 2 brothers, 1 sister, 1 wife, 4 children, 1 dog, few friends;
ancestral sculpture in his heart.
Last 11 years he lives and works in Libušín, CZ.
Sometimes he would like to be a better being than he is, sometimes he doesn’t care.

KATHERINA ZAKRAVSKY
Studies of Philosophy in Vienna, 1999 ph.d. with a thesis on Immanuel Kant’s Theory of the University; 1997 – 2001 teaching jobs in film theory and Walter Benjamin’s concept of history in Linz and Vienna; several publications on political and cultural theory.
2001/2 researcher in theory at the Jan van Eyck Academy in Maastricht (NL) with a series of video, conversation and performance projects on biography.
Since 1998 dance and video related performance work solo and in collaboration; 1999 - 2000 collaboration with Lux.Flux (A) and Saira Blanche Theatre (Rus), since 2003 text, concept and dramaturgy for the choreographer Chris Haring (A).
Since 1999 a series of solo works on Vazlav Nijinsky’s “Afternoon of a Faun” (Vienna, Labin, Berlin, St. Petersburg).
1999 Video/Live-Performance “Director’s Cut” (with Oleg Soulimenko; Jack Hauser)
(the video was part of IMAF 2003).